Looking over the streams of narratives coming out in wake of the mass shooting here in Buffalo, I encountered this one about a candidate for governor capitalizing on the tragedy for visceral "string'em up and hang'em" votes (or just dumbly offering solutions). 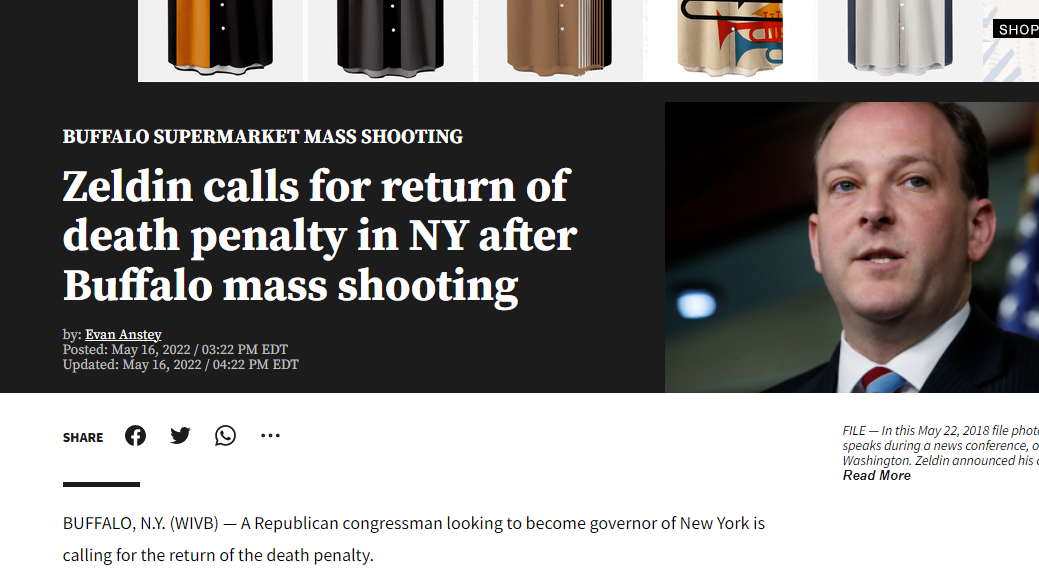 It's not that I don't think the death penalty is worthy justice for the victims; it's just that knowing the ultimate penalty might be death doesn't actually deter enough people from doing whatever heinous thing they might, to make me think politicians who champion it are on the up and up level with voters.

The way we, if you'll pardon the pun - execute - the death penalty in America doesn't work to deter criminals enough to tolerate the immorality and penchant for errors of process it incurs.

In the first place most people doing horrible things are acting at some level, irrationally in the first place. Crazy doesn't consider its future. And to those who might, they know the death "system" can be gamed and dragged on for years.  In fact, you don't even have to "game" it; by default it just is a slow multi-decade process.

As we know the process to take, it would never effectively deter anyone in their 40s or older from acting out who would sooner die of old age waiting for their turn in the chamber.

The death penalty also doesn't deter the "dry suicides". People who have killed themselves spiritually ages ago yet still walk physically among us hurting others and committing crimes, indifferent to their life status or to that of others.  Our consumer winner-lose society breeds these dark souls to no end.

And scrupulous politicians know it. It's just more "Rush Limbaugh Profit Hour" nonsense designed to illicit more votes from people who have an over-idealized idea of what the death penalty on the books actually accomplishes.

I have always been more for keeping people locked up without parole. Sometime after the fifth year or so of hardcore incarceration they truly begin to feel the torture of consequence for what they've done as the world forgets about them and whatever stupid cause they acted in the name of.

Plus, if there has been a mistaken conviction, which is far more common than people think, it's a safeguard that they can be still be rescued.